Tuesday, May 30, 2006
Stay Safe Out There! I hate seeing motorcycle accidents, especially when it's due to rider stupidity. It reminds me of the risks of motorcycling and makes us all look bad.

I came up on an accident scene today on the lower section of Angeles Crest Highway. The fire department guys had traffic stopped on both sides and I happened to be the first one to arrive heading uphill. Fortunately it didn't look major; the rider seemed okay and it was likely a single bike accident. They had the gurney out and everything, but ended up not taking him. He looked a little shook up but okay.

The first thing I noticed was that his t-shirt was all torn up, which probably meant that was all that he was wearing. I also noticed his bike was a relatively new sportbike of some kind though I couldn't quite make out the exact model. In any case it seemed like an all-too-typical scenario of a rider going beyond his abilities and losing control of his bike.

1. Wear good gear. It might be uncomfortable or hot but it could save you a trip to the hospital. Maybe even the morgue.

2. If you're gonna ride a canyon road, get to know that road well. Today's accident was on the lower section of Angeles Crest Highway, a section that all the smart riders know is congested and dangerous. Even the assholes that go way too fast on ACH save it for the less traveled parts.

3. Never go faster than your ability allows. Canyon roads mean blind turns, including blind decreasing radius turns. If you're at the limit of your cornering speed in a blind right hander that suddenly tightens up, you're in a heap of shit.

4. Don't cross over the double yellow line or pass on the shoulder.  ¶ 12:28 AM 1 comments
Monday, May 29, 2006
Spanked a Squid Today I had a really good ride today on one of my favorite roads, going a bit quick through the turns but taking it easy on the straights like I always do. I was in a straight section of the road cruising along around 60 mph (the speed limit there is 55 mph) when I noticed a gixxer (Suzuki GSX-R) coming up fast behind me. I stayed in front of him for a couple of turns and noticed he fell behind, but he kept speeding up in the straights and coming up right behind me. I waved him by on the the next straight (as I usually do with the more insane riders) to avoid any problems.

When he passed me I noticed he was wearing jeans and sneakers so I couldn't help thinking to myself that he was probably a squid. The next turn we hit proved my instincts right, as he slowed down dramatically from his straight line speed and struggled to negotiate the curve. His body positioning was all wrong; he kept pushing the bike down beneath him instead of getting his weight on the inside of the bike through the turn. We continued the next 7 miles or so in the exact same manner - he would try to pull away from me in the straights (hitting 75+ ) , only to have me catch up to him with ease at every curve. It made me nervous to watch him ride as he was near the limits of his ability. I hope he takes the time to try to find out why the rider behind him nearly gave him a prostate exam every at the exit of every turn, despite his attempts to distance himself by opening the throttle in the only place he could - the straights.  ¶ 11:50 PM 0 comments
Sunday, May 21, 2006
Sportbike Distance Riding Yesterday was probably the fifth or sixth time I've done 300+ miles in a day on my 2005 R6. Make no mistake; it's not meant to be ridden those distances. My hands, arms, knees and butt (in that order) are definitely in pain by the end. For those of you who are thinking about getting a true sportbike and enduring days like these once in a while, here are some survival tips. Not that I think I'm an expert after going those distances just a handful of times, but I thought I'd share what I've done right (and wrong) so maybe someone can at least avoid the same mistakes I've made.
¶ 11:07 PM 0 comments
Best Ride Yet Yesterday was motorcycle heaven (or at least sportbike heaven) as far as I was concerned. A few members of my riding club and I went on an incredible 300+ mile journey covering four counties and three of the best roads I've ever ridden. 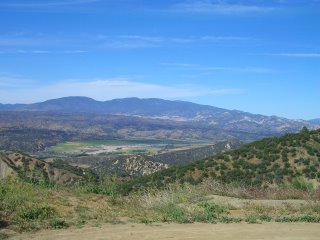 Riding a great road in perfect weather is every biker's dream day, so imagine riding three great roads back to back to back in perfect weather. We started in Ojai, California and took highway 33 north through the mountains of the Los Padres national forest. That was followed by Lockwood Valley Road with its mix of twists, dips and wide open straights. Next came Cerro Noroeste, probably my favorite road so far even after riding it just once. We looped around and took highway 33 south back to Ojai, a nice treat to end the day. 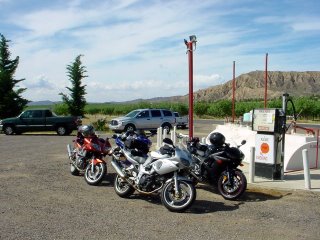 It was over 300 miles including getting to Ojai and back from where I live. My R6 isn't exactly built for comfort so I was definitely in a little pain at the end of the day. No matter; it was still the best ride I've been on and well worth the soreness. I can't wait to do it again.  ¶ 10:40 PM 0 comments
Monday, May 15, 2006
The Ambulance Guy Said Leather is Good 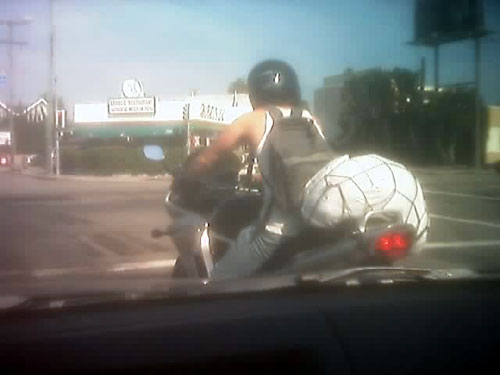 This picture is some random squid I saw last Friday. I'm sure it feels great to ride in a tank top, but it's a huge risk. The day after I took this photo I went on a group ride on Angeles Crest Highway. An emergency medical technician started talking to me at the gas station, imploring me to ride safely that day. Another lady chimed in, "Well, look at all that protection he's got on," referring to my leathers. The EMT, who regularly scrapes fallen motorcycle riders off the pavement on ACH, pointed out that leathers make a huge difference in avoiding injuries in a fall. He cringes when he sees anyone riding in a t-shirt.  ¶ 12:14 AM 0 comments
Monday, May 08, 2006
Another Perfect Sunday I rode w/ my buddy Doug up and down Pacific Coast Highway in Malibu today. Perfect weather - sunny, cool and a slight breeze. One of those days that reminds me why I love living here so much.

In any case I like riding with Doug a lot even though we have the most oddly paired bikes of any riding buddies. He's got a big ol' Kawasaki Vulcan Drifter 1500, not something you'd expect to see riding with an R6. When we ride together we don't even take any tight twisty roads (the kind of road I actually prefer) because he'll start scraping floorboards and doesn't enjoy the ride as much. He does appreciate sport bikes though as he used to own one, so he doesn't mind if we split up for a few minutes while I hit some twisties.

Today he recommended I try Encinal Canyon Road between PCH and Decker Canyon. It's a road he used to ride way back when he had a sport bike, so he thought I should check it out. It's only 5 miles each way, so he chilled out at the bottom while I took the road. 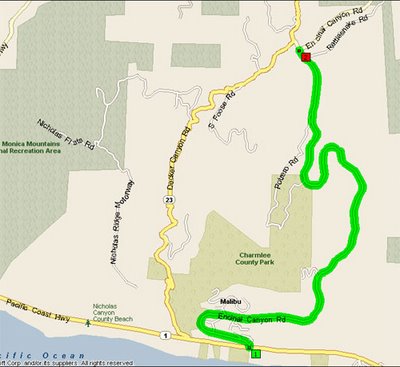 It's not a technical road at all; the turns are all pretty easy. Unfortunately what that means to some riders is that they "must" take these turns at high speeds to make them fun. The speed limit on that road is 40 or 45 mph, but another rider coming the opposite way was easily doing 75 mph when he passed by. I took the road at a safe (for me), but spirited pace. There's one long sweeper as you can see on the map, but it's also got some good bumps - nervous times when the bike's leaned over with a little speed. I can easily see it being a fun road for some, but I prefer something tighter and more technical. I'm not about all out speed; I prefer working on perfecting my turns and lines.

In any case it was cool to try a new road, get out in the perfect weather and hang out with my buddy. Weird how riding a motorcycle makes some things so much more fun.  ¶ 12:19 AM 0 comments
Wednesday, May 03, 2006
Target Fixation is a Bitch Two people in my riding club have gone down due to target fixation within the last few weeks. For any of you unfamiliar with the term, target fixation is a nasty habit that's hard to break. It's the tendency to lock your vision on either a stationary or moving object, like the rocks on the side of the road or the car in front of you. Your bike tends to follow your eyes, so target fixation sometimes leads to hitting the very thing you're fixated on.

Breaking that habit is a skill that is learned and developed. Look where you want to go, not at the thing you're trying to avoid. Sometimes it's so damn hard to peel your eyes off the target and look up the road, but it's a necessary skill to survive the motorcycling game.  ¶ 12:19 AM 0 comments