Sunday, August 13, 2006
Swingarm Spools vs. Sliders A few months ago I installed a set of Shogun swingarm sliders: 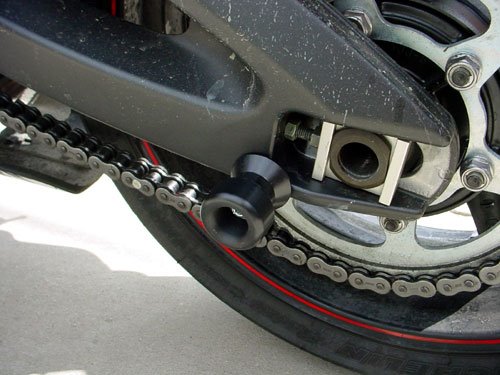 I needed spools to use a rearstand, so I figured I might as well get the combination spool/slider things to protect my swingarm in case of an accident. What I failed to realize is that the relatively thin 6mm spool bolt combined with the large Shogun spool is not ideal for withstanding impact.

When my bike went down during a 10 MPH spill (see the post here: http://www.startriding.com/blog/ray/2006/06/my-first-motorcycle-crash.html), the swingarm slider bolt snapped like a twig and my swingarm took some damage. Fortunately it was nothing major but it was still disappointing nonetheless. The large size of the Shogun spool obviously creates too much leverage on the 6mm bolt during any impact of moderate or greater strength.

I've since replaced them with standard spools: 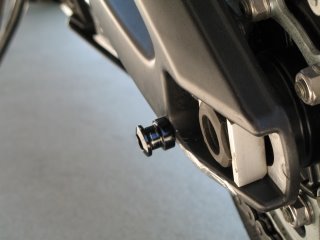 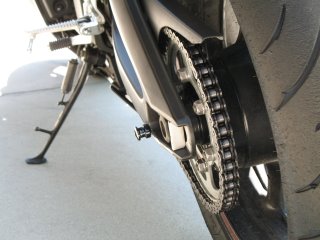 They probably won't offer a lot of protection if I crash, but there's much less chance the Paris Hilton-esque skinny 6mm spool bolts on my Yamaha will snap. The Shogun spools may work a little better if you have a Honda, Kawasaki or Suzuki - their spool bolts are 8mm wide.  ¶ 6:28 PM 1 comments
Thursday, August 10, 2006
Zero Gravity Double Bubble - What Nobody Tells You 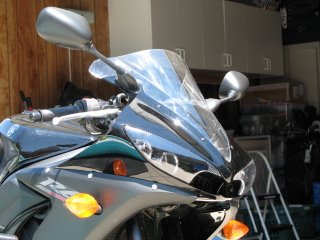 I see tons of sport bikes with racing screens from Zero Gravity and other makers, and a lot of that has to do with looks as well as extra wind protection. I wanted a little better wind protection at track days so I decided to order a Zero Gravity Double Bubble windscreen for myself. I ordered a clear one to have one less potential thing to be written a ticket for, but was a little surprised to find what was printed on the plastic bag it came on:

"Street Usage: This product is made for off-road and show purposes only and is not intended by the manufacturer for use on public streets or highways in areas which forbid such use. Please check vechicle code in your area regarding usage."

"Shatter Resistance: Zero Gravity windscreens are made of acrylic plastic, a material that is NOT shatterproof. By installing this product onto his or her motorcycle, the purchaser and user of this product acknowledge the potential injury that could result from human contact with a shattered windscreen and assume all risk and liability associated therewith. Not all Zero Gravity Windscreens are DOT certified."

Hmmm. Out of the thousands of sport bike owners that have these windscreens on their bikes and participate in forums, I've never known anybody to point this out. Maybe nobody bothers to read the plastic as they're ripping their new windscreen out of the bag. Factory windscreens are typically made of polycarbonate (Lexan most likely) which is DOT approved and shatterproof. Acrylic plastic might as well be window glass when compared to Lexan for shatter resistance.

I imagine this is a reason aftermarket sportbike windscreens can be the target of fix-it tickets, in addition to the fact that most buyers opt for tinted windscreens (which are also illegal in most states). Will I keep mine? Sure. But now I know why they're so cheap. 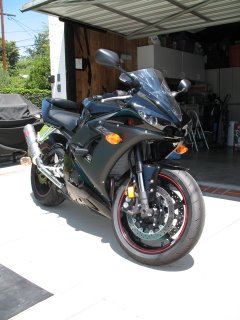 I did get a chance to ride on the freeway for a while after installing it, and there is a noticeable difference when ducking down behind the bubble. It definitely creates a bigger pocket of air without disturbing the aerodynamics of the bike. I must admit though that I'm not a big fan of the way it looks. I prefer the more congruous lines of the factory windshield compared to the Double Bubble's bulbous profile. In any case I'll at least keep it installed for my next track day and see how it performs.  ¶ 11:10 PM 0 comments
Saturday, August 05, 2006
First Trackday at Willow Springs
I can't say for sure that Willow Springs is "The Fastest Road in the West" as it so claims, but it's sure as hell the fastest track I've ever been on. When looking at the track map it doesn't really look like much:

But when looking at the track in person, the elevation changes certainly make things a little more interesting: 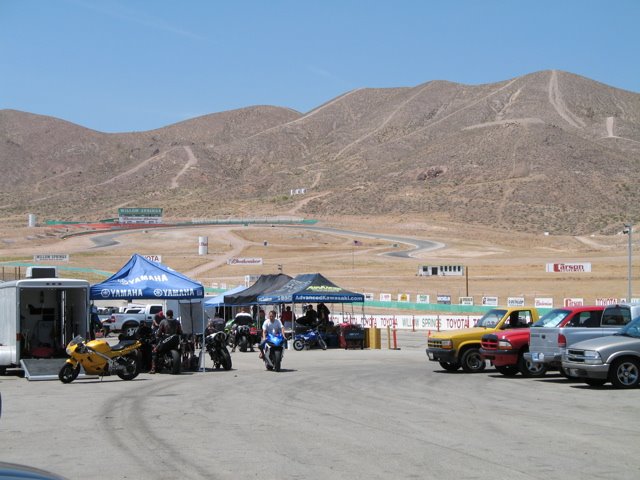 That visible horseshoe section is turns 3, 4 and 5. The ups and downs in that area make things very challenging, not to mention turn 4 has no camber and deceives riders into thinking they can go faster than they should.

The width of the track is 40 feet or so in some places; taking advantage of all that real estate took a little getting used to. In some places I found it difficult to properly use all of that space, especially in the transition from turn 3 to turn 4. I found myself trying all kinds of lines throughout the day without really finding one that felt perfect. I'm going back in about a month; that will be my first order of business.

One thing I really enjoyed was attacking this track with a fresh set of Dunlop Qualifiers. They seem to be the new rage with trackday riders as they're actually a little cheaper than the ever-present Michelin Pilot Powers but just as good or even better. Sport Rider rated the Qualifier slightly higher than the Pilot Power in their last street tire comparo (December 2005 issue); my personal opinion is that Dunlop's new weapon performs similarly to the Pilot Power but just a hair sharper. Turn-in felt a wee bit quicker and front-end feel was solid even under hard braking. 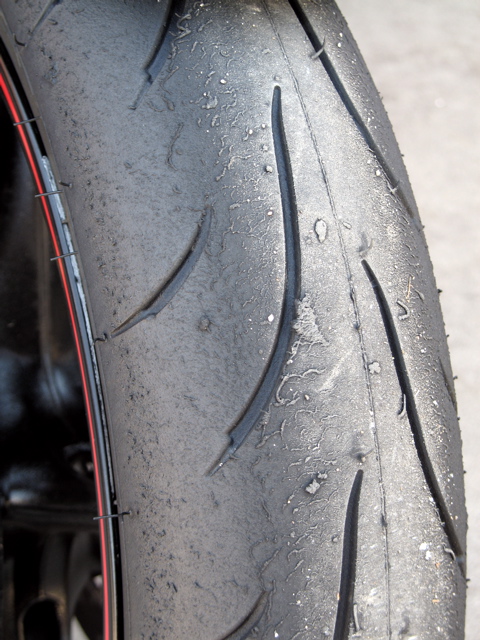 The front tire after a few sessions in the 90+ degree heat. 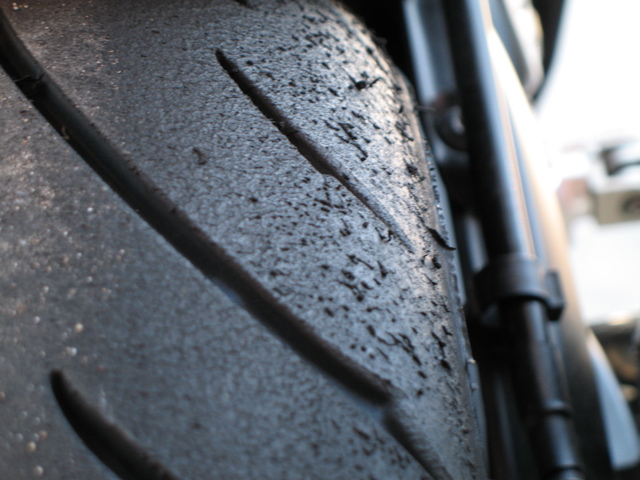 The rear tire held up pretty well despite the heat and abuse.

One thing that did have a noticeable effect on just about everyone was the wind. By the early afternoon we were getting whipped by a constant 25 MPH gust. Going through turns 8, 9, the front straight and turn 1 became a serious test of nerves. By my best estimates I was doing somewhere around 130-140 MPH on the front straight most of the day (the organizer requires riders to tape over the speedometer so nobody obsesses over MPH). At the end of the front straight I would sit up, move my butt off the left side of the bike, then start braking and downshifting to get ready for turn 1. Doing this at full speed with a 25 MPH crosswind is a little scary to say the least. Let's just say I had to perform a diaper check when I pulled into the pits. Judging by the way the track emptied out mid-afternoon, I wasn't the only one with dirty diapers.

Regardless of the wind it was still an excellent trackday. I felt better about my form after seeing some of the photos from Cali Photography, who now have such an elaborate trackday photo operation that they have a trailer on-site where you can walk in and see your photos right on the spot. I'm not sure my lines were all that good, but I did my best to position my body well and transition smoothly.

This was early in the day - still wasn't quite feeling the lines right.

I was a little more comfortable at this point.

This was a split second after the photo just above.