I had read many good things about the Spring Mountain Motorsports Ranch track in Pahrump, Nevada, and this past weekend I finally got a chance to ride the track for myself. Four of us from the SCLR group spent the weekend in Pahrump so we could ride the track on Saturday with Cal Sportbike (TrackXperience). The verdict - it's a decent track but we've ridden better. 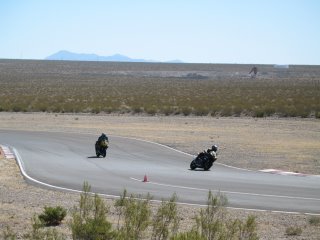 Heading into turn 9
If you notice from the picture above, the track was paved in thirds. Unfortunately those thirds were not blended together perfectly and there are parts of the track where running over those grooves caused a little movement. Not enough to really cause problems, but enough to make a new-to-this-track rider a little unsure. There were also a few rough patches and bumpy parts that gave me trouble, particularly in turn 10. Twice in turn 10 my rear wheel got the wiggles and I nearly sh** my pants. It took me a while to figure out I had to really cut that apex clean to avoid the bumps. I wasn't crazy about turns 5B and 7 either. As with any track, familiarity makes these imperfections less of an issue, but since this was my first time there I of course found them all. 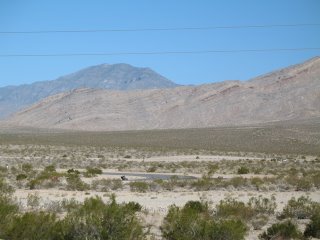 A view of the track (sort of)
Another thing that made it difficult for me to adjust to this track was the lack of visibility. The picture above was taken from the top of the grandstands, but it's still difficult to see where the track is. The tall brush and relatively flat track made it tough to look (and plan) ahead at times. Even when we first pulled into the facilities and pits, we couldn't figure out where the track actually was.

Last, but certainly not least, I feel I need to say something about the riders. For whatever reason, there were several riders in the level 1 group that should have been in level 2 (level 2 is faster). Unlike other track day organizers that use three groups, Cal Sportbike only uses two. I've approached the point where I should ride in level 2 if I'm at a track I'm comfortable with, but I rode in level 1 this time because I was new to Spring Mountain. Naturally I'll be one of the faster riders in level 1, but I'm very good about following the safe passing rules as set forth by Cal Sportbike who emphasize that they run "gentlemen's rules" for passing (meaning 6 or 8 foot passes and only in designated areas). The aforementioned riders who should have been in level 2 were running something more akin to "asshole's rules," passing people with 2 feet to spare, stuffing other riders constantly (passing on the inside at the last second before a turn) and doing almost anything to stay in a pack because they were videotaping each other (something else that Cal Sportbike is supposed to prohibit).

I've got no problem with faster riders in level 1, but only if they follow the rules as set forth by the organizers so they don't spook the newer riders and cause problems. I'm dissappointed with Cal Sportbike for not being able to better enforce their own rules. It wasn't until the very late afternoon (and after several complaints) that those particular riders were talked to. 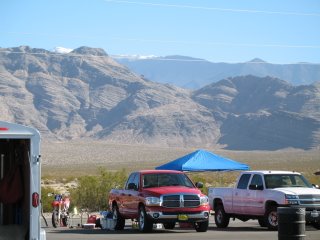 Is that snow?
Okay I'm done complaining because we still had a really good time at this track day. The challenge of a new track is always a good thing; I get excited at the thought of learning a new set of turns and comparing it to all of the other tracks I've been to. Riding with friends makes it even better. Cal Sportbike fed us and gave us water all day. I think there were no crashes at all! I liked the track for the most part except for two of the turns and the paved-in-thirds thing. And like every track day, it's a learning experience.

P.S. My Dunlop Qualifiers definitely did not exhibit the same grip they did when they were new. This was my third track day on the same set with about 500 street miles in between, but I will definitely get a new set for my next visit to a track.  ¶ 6:24 PM 0 comments