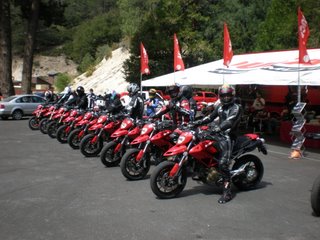 Ducati had its own campaign in full swing this year, promoting the Hypermotard with a nationwide test ride tour. I had the good fortune of attending the test ride on Southern California's famed Angeles Crest Highway. Ducati had set up camp at Newcomb's Ranch (the official Angeles Crest Highway restaurant/bar/hang out) and all that was needed was a valid CA driver's license with an M1 motorcycle endorsement. Sweeeeeeet...

I'm not the most knowledgeable supermoto guy so this was something new for me, although the Hypermotard is not a typcial supermoto bike. It's powered by a big 1100cc L-twin engine, albeit the air-cooled 2 valve per cylinder type (as opposed to Ducati's liquid-cooled 4 valve per cylinder superbike engines). I won't go into anymore technical detail as that's been covered by countless publications, so let's move onto the test ride.

We pulled up to Newcomb's Ranch to see Ducati's big truck trailer, tent and about 12 Hypermotards ready to ride. I got ride an S model which features upgraded suspension, brakes, wheels, tires and exhaust. The test ride had two proctors, one at the front and the other at the back. When it was our turn, we took off up the mountain for the test loop. It's about 13 miles east from Newcomb's Ranch to where Angeles Crest Highway is currently closed from storm damage in 2005.

The seating position is bolt-upright but comfortable; the bike feels tall but light. You feel like you're flying because you can't see any part of the bike if you're looking straight ahead. The wide, flat bars provide superb leverage and the bar-end mirrors are easily the most usable I've ever seen on a motorcycle (you might wanna tuck them in if you're doing some lane splitting though). The ride pace was surprisingly brisk for a manufacturer-sponsored test ride, so we got a decent feel for what the Hypermotard could do on a great stretch of twisty highway.

The first thing that hits you is the low-end torque. There's plenty of it but it's surprisingly easy to use. The big engine does run out of steam rather quickly toward the top of the rev range, but it has extremely usable and sweet-feeling power (there was none of that abrupt on-off jerkiness I was expecting). It's surprisingly soft for an 1100, but then again it does only have 2 valves per cylinder and is air-cooled. Hustling it through the turns is a somewhat numb-feeling compared to a supersport 600 (to be expected), but enjoyable in a whole different manner. There's a lot of suspension travel so you need to be smooth on the controls, but if you are you're rewarded with a turn-sticking experience so unlike anything outside the supermoto realm. The wide bars make turning a breeze and rolling on the throttle coming out of the turns is all smiles.

Our test ride was drama-free and over way too soon. I would've happily ridden it all day and taken it to the coast, but had to grudgingly give the thing back after our 26 mile canyon run. The lead proctor was very cool and would've let us do another run if we waited for the next opening, but by that point it was time to head home. The funny part was getting back onto my R6 afterwards. The R6's angled clip-ons felt all wrong after using the Hypermotard's wide, flat bars. The Hypermotard was loads of fun and comfortable to boot. $12,000+ worth of fun? Depends on your budget I guess.