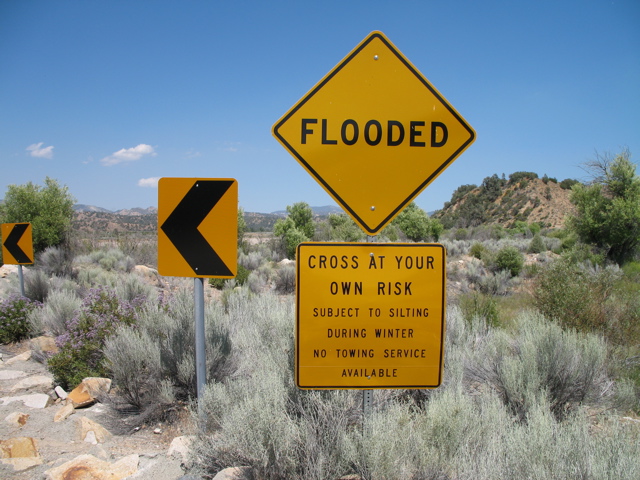 "Yeah yeah yeah," I thought to myself as we approached this sign. There's a stream that's always trickling across this road but I've made the crossing probably four times before without incident. I was riding w/ my buddy Louie and a co-worker. We were in the Cuyama valley to ride the incredible roads out there and we had just gotten a mile or two into Lockwood Valley Road. 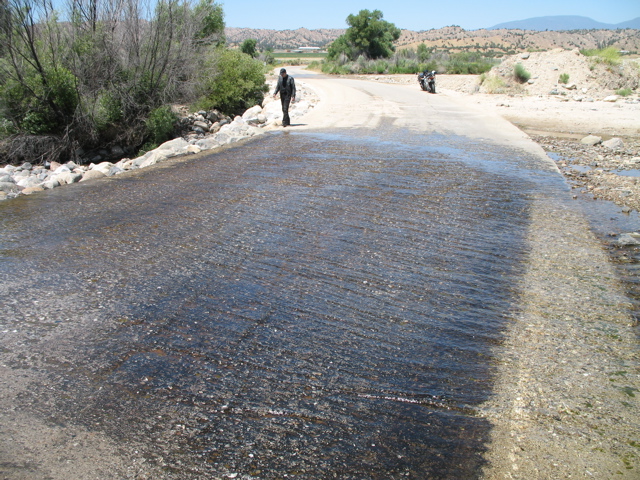 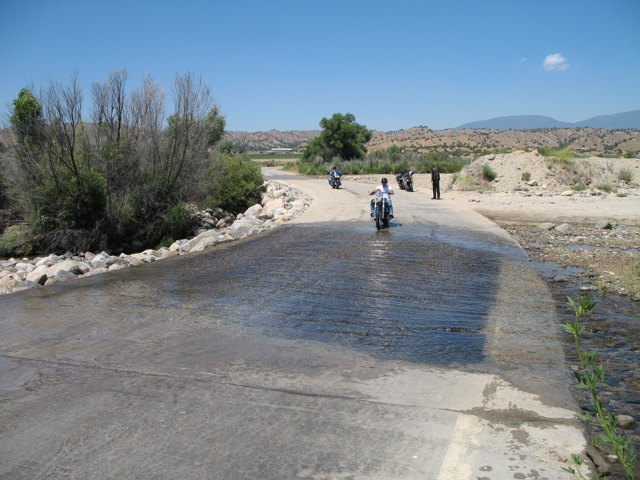 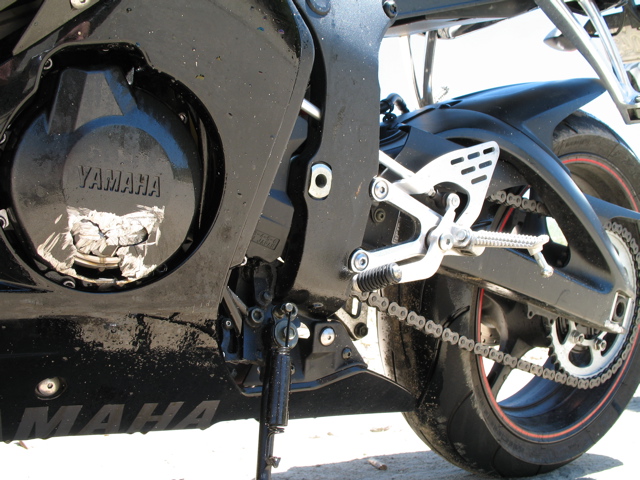 ...this might happen. Going through the water at about 10 MPH, I decided to sneak open the throttle. Next thing I know, I'm on the ground in the water, watching the bike doing a bouncing slide away from me. The funny thing is how far away the bike stopped (25 feet or so) considering how slow I was going, and also that my tank bag came unzipped and my stuff went flying everywhere. That was actually funny.

As you can see in the picture, the engine case cover got shredded and that meant all the oil came out. No riding home. The shifter got bent and the swingarm slider snapped like a twig. The swingarm has a nice scrape on it but is not damaged badly. My frame sliders worked beatifully and kept the fairings completely free of any scratches. The clutch lever is bent. 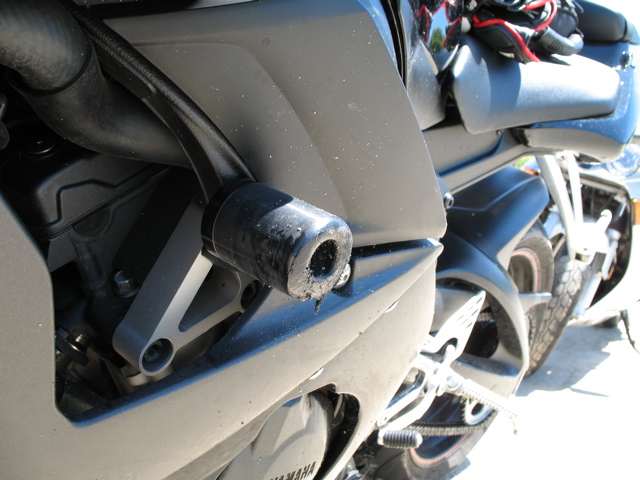 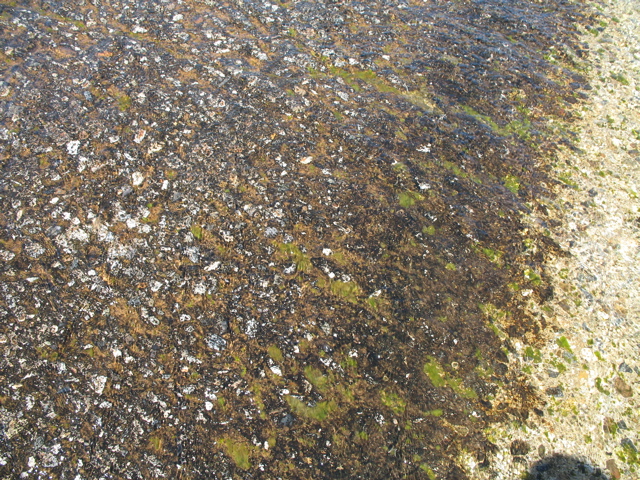 This is why 10MPH + sneaking open the throttle was retarded. Moss collects on the pavement. I almost ate it just walking through the water. It's slippery as ice. 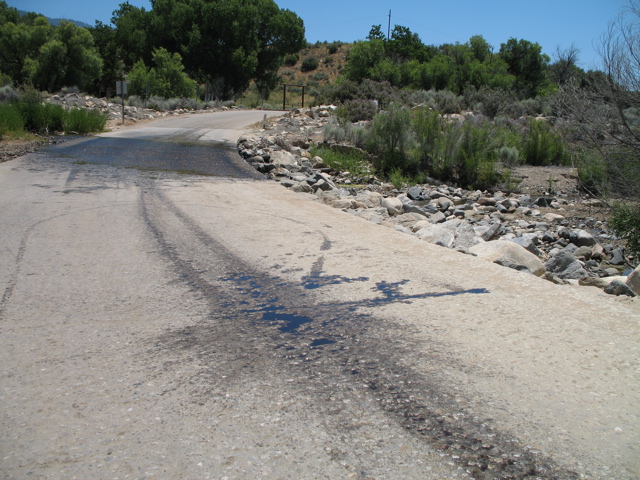 Here's the oil that leaked from my bike. We didn't want to leave it on the pavement so... 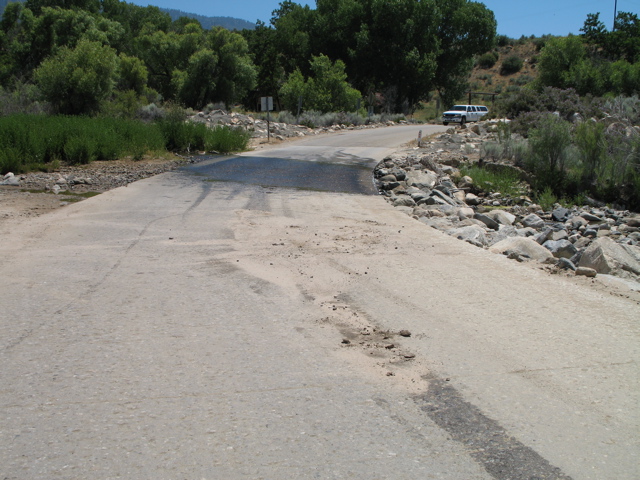 We covered it with sand. 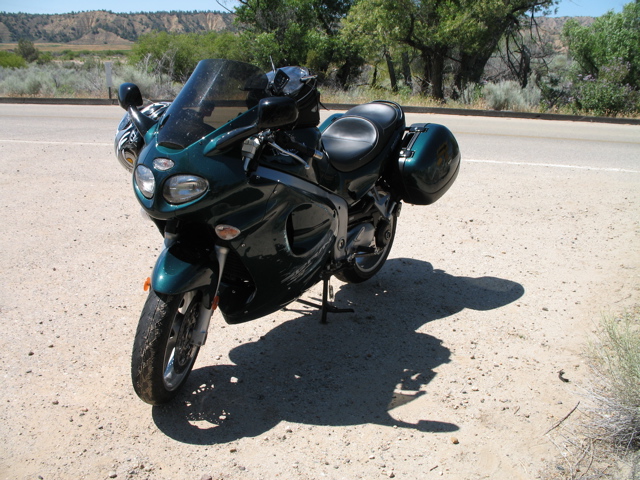 What was funny was we saw this bike parked just before the turn that goes into the water. It turns out that... 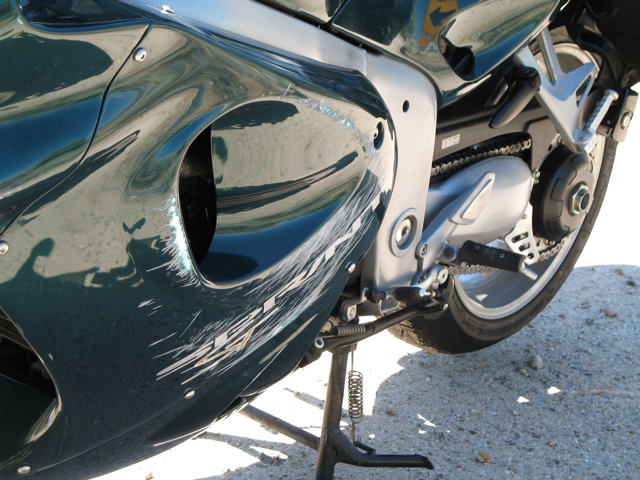 The bike's owner, Pat, had also biffed in the water just a little while before I did. His bike wasn't damaged as bad as mine was, but it wouldn't start again. He was waiting for his buddies to go home to get their truck and come back to get him. All the way to Huntington Beach and back. Ugh. If that wasn't bad enough, he said a girl on a Harley did a belly flop into the water just a few minutes before my incident. Apparently this happens quite a bit. Lucky for her the bike was fine and she was able to ride away. 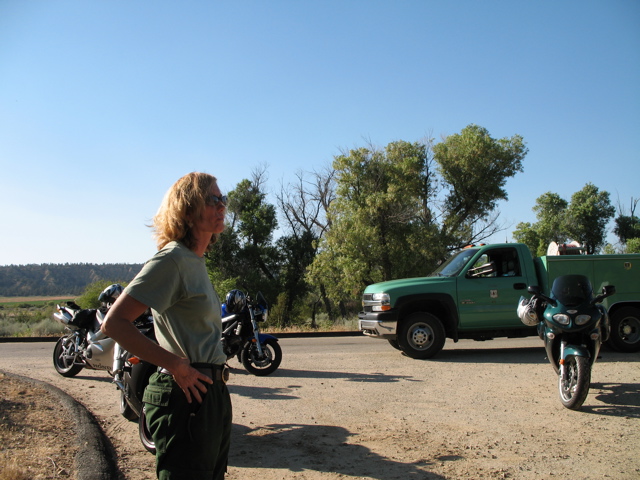 This is Barbara. She works for the US Forest Service. She stopped by a few minutes after my spill and we had the most confusing, repetitive and utterly useless conversation of the year. She spent what seemed like an eternity asking if we wanted her to call a tow service, but that AAA or any other tow service she knew wouldn't come out anyway. WTF did you ask me for then?! After a while we just gave up and told her we would handle it. Sheesh.

Unfortunately there is no cell phone service in BFE so we had to find a hard line. We decided to leave the bike next to Pat's and ride 15 or so miles back to the Santa Barbara Pistachio Company, a little market / single pump gas station in the middle of nowhere but the only place with a hard line for miles. I had to ride bitch on my coworker John's VFR.

The girl working the cash register was soooo nice. She called a tow service for me, but they were unfortunately going to take two hours to arrive. F***. AAA wouldn't come out. My AMA Motow service is only 35 miles and I was a lot farther than that from my home mechanic. Even if the tow service had showed up in two hours, we would've had to just tow the bike back to the market, leave it overnight, then come back the next day with a trailer and haul it to a shop. I was going to be out $$ for the tow and $$$ for the repairs. F***.

By sheer dumb luck, some dude pulls up on a beat up Ducati 748. He looks like a regular guy out for a ride. We start shooting the shit, blah blah blah. Ends up the dude is in the process of buying (and currently works at) Hang Time Motorcycles in Frazier Park. He offers to get their truck, load the bike and bring it back to their shop for repair. I'm stunned.

We headed back to where we left the bike while Sean (or Shawn, or Shaun) rode back to his shop. Pat was still there waiting for his buddies, poor guy. We all sat and waited; me for Sean and Pat for his buddies. 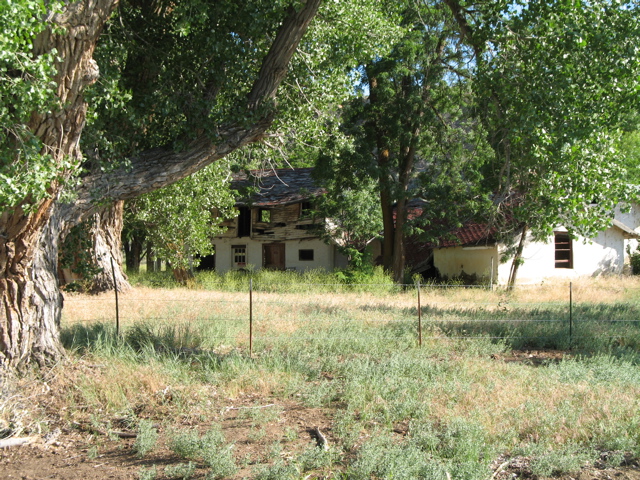 We had parked the bikes in front of this scary ass Texas Chainsaw Massacre Blair Witch abandoned house. 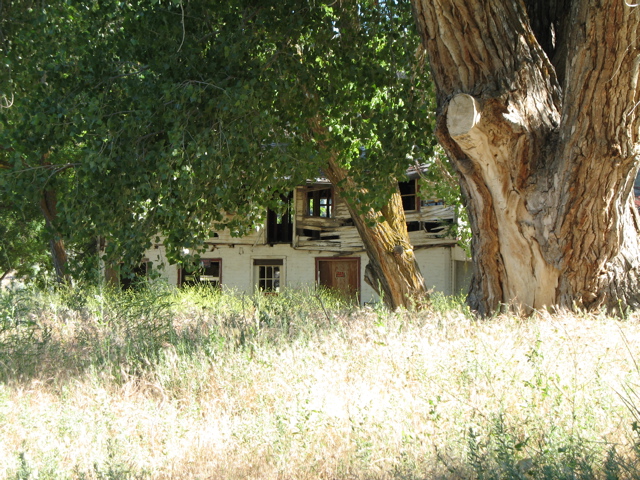 Yup, it was scary. 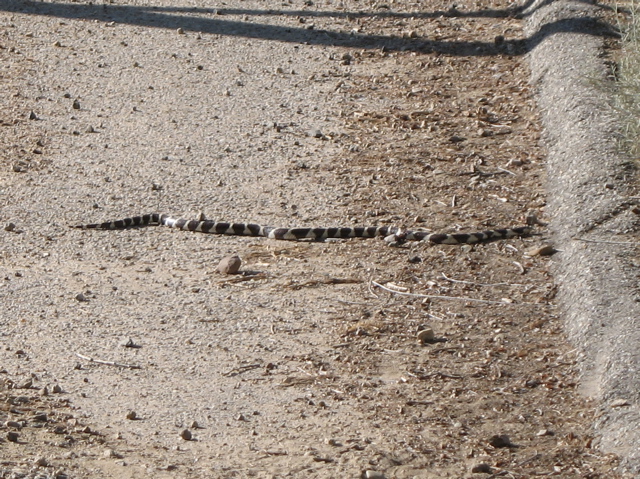 We also got a close up look at a California King Snake.


We were waiting for a while. It was hot and we were getting attacked by all kinds of bugs. Shade was sparse, we were sunburnt and tired. Finally Sean arrives. Unbelievable. He offered to take Pat's bike to his shop as well; Pat accepted and figured he'd just call his buddies when we got to an area with cell phone service. 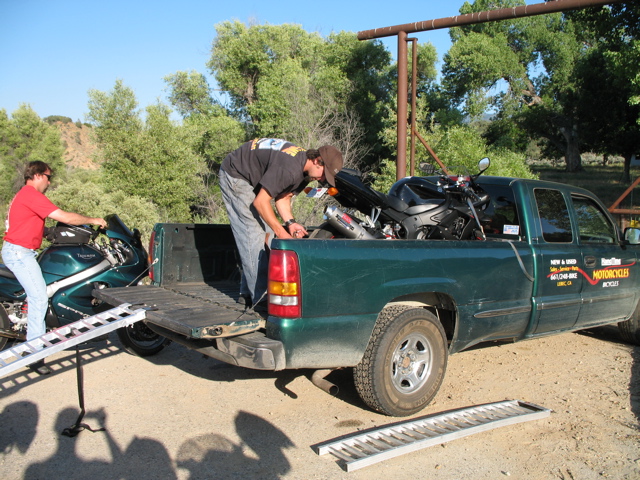 Sean is the one tying my bike down; Pat's on the left moving his bike so we can load it. 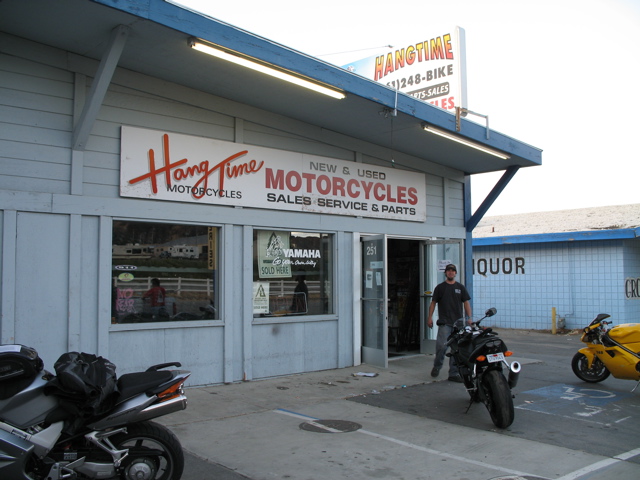 At last we get the bikes to Hang Time Motorcycles in Frazier Park. Sean is going to fix my bike this coming week; estimate is only $150 - $200. He didn't ask a penny for transporting the bike. 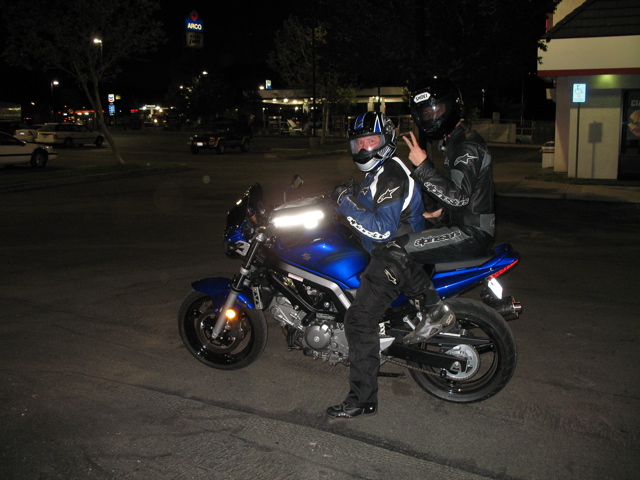 The only way I was getting home was by riding bitch on Louie's bike. He'd never ridden two-up before either. Fun!

Today was bad because:
* Duh, I crashed.
* I missed the father's day dinner we were supposed to have (yes it was a day early).
* My two friends spent their whole afternoon and evening helping me out. We didn't get home until 10:00 PM.
* My cell phone got f'd up from the water. Must be replaced.

Today was amazing because:
* Sean restored my faith in my fellow human being. The guy went to unbelievable lengths to help me out. You bet your ass that Hang Time Motorcycles will get plugged plenty on Startriding.com. Coincidentally, they just bought out Starcycle. That's part of the reason it moved to Frazier Park. In fact, it's just two or three stores down from Hang Time now.
* My friends stayed with me all day and night to help me out. Louie is a stud for getting me home two-up with no two-up experience.

Lessons learned or reinforced:
* Good gear is worth every penny.
* Frame sliders work.
* Standard swing arm sliders do not work that well - the bolts are too thin.
* When riding through water, watch out for moss. Move slowly, slip the clutch and go as straight as possible.
* Barbara of the US Forest Service is a doofus.
* Crashing where there's no cell phone service = bad.  ¶ 8:22 PM 0 comments
Thursday, June 08, 2006
So Many Good Motorcycle Roads near L.A. Lately I've been thinking about how lucky I am to live in an area with decent access to so many great motorcycle roads. There have been days where I've taken in the ocean air while riding Pacific Coast Highway in the morning, then later in the afternoon found myself smelling the sweet pines riding Angeles Crest Highway in the Angeles National Forest. To the south are the incredible roads of eastern Orange and San Diego counties, including the (locally) legendary Palomar Mountain Road. To the north, as I recently discovered, are such gems as highway 33 north of Ojai and my favorite, Cerro Noroeste. 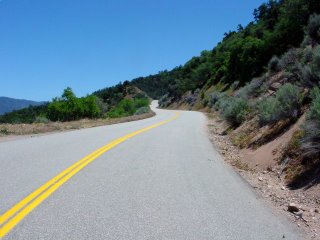 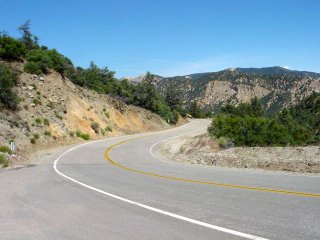 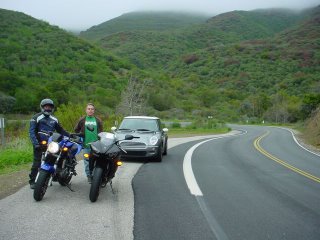 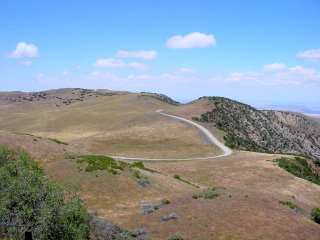 Any rider living in L.A. is not that far from any of these incredible roads. Of course getting through the traffic can be tough sometimes, but once past the hordes and into the surprisingly serene environments of these roads, riding is all smiles.  ¶ 12:28 AM 1 comments