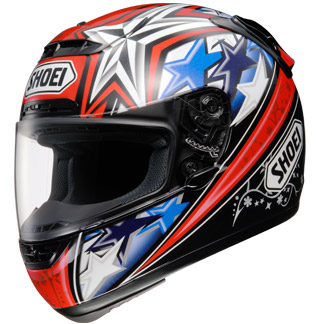 If you’re just getting into motorcycle riding, you may have missed the 2005 bombshell article that Motor Cyclist magazine published regarding helmet safety (here it is).  To make a really long story short, they conducted their own tests and concluded that Snell’s M2000/M2005 standards produced helmets with shells that were too stiff.  Overly stiff shells don’t properly collapse under impact, transmitting too much energy to the rider’s head.  There are other standards from other organizations (DOT, BSI, ECE) that Motor Cyclist felt produced safer (softer) helmet shells, but here in the U.S. you’re pretty much going to get a helmet that meets both DOT and Snell standards.

To say this article created a lot of controversy is a huge understatement.  In the end though, helmet manufacturers continued to produce American market helmets conforming to Snell standards and we, the riders, kept buying them.  The good news though is that Snell has a revised standard called M2010 that most helmet manufacturers will soon be adopting.  I geeked out and actually read the standard, comparing it to the M2005 standard to look for differences (they’re both available on Snell’s web site).

I gleaned two critical differences when comparing the two standards:  Snell expanded their testing criteria (including using two different sized head forms instead of just one) and lowered the acceptable head form acceleration upon impact.  It’s almost shocking to think that Snell used only one head form for M2005 testing, as if they weren’t acknowledging that bigger heads weigh more and are affected differently than smaller heads in a similar impact.  As for lowering the acceptable head form acceleration upon impact, this goes back to the criticism that the M2005 standard produced overly stiff shells.  By lowering the acceptable acceleration during testing, this will create softer shells that will better dissipate survivable impact energy.

These are very good things in my opinion and personally I’m going to buy a new M2010-based helmet as soon as I can afford the one I want.  Who knows for sure what caused Snell to revise their standard, but read all you can and decide for yourself which standards you want your helmet to meet.  I’ve included some helpful links below.