Supermoto can seem weird to the uninitiated. A dirt bike with street tires? It’s not until after you’ve ridden a supermoto bike that you understand. They’re incredibly light bikes that you can flick with ease, making them amazingly fun in tight turns and the genesis of photos with riders purposely fishtailing into corners. If you’ve never ridden one but want to learn how, you do what I did — go to Socal Supermoto at the Adams Kart Track in Riverside, California and have Brian Murray show you what it’s all about.

Compared to other riding schools, Socal Supermoto is a lot more laid back. But make no mistake, it’s an incredible learning experience and Brian Murray is no slouch of a teacher. Anyone who follows MotoGP or any superbike series probably knows that the best road racers all train in dirt and supermoto for good reason. Understanding traction and how to ride in varying traction conditions is what champions do, and supermoto is an excellent way to learn that skill. And as with all true supermoto tracks, part of the course is dirt. Talk about learning the limits of traction, especially when you’ve got street tires!

The hardest part for me, as someone who’s only ridden dirt bikes a couple of times and does a lot of sportbike track days, was adjusting to the very different body position and riding on the dirt. (OK fine — the dirt part of the course scared the shit out of me.) But Brian and the instructors are there to help, and gave me some very sound advice when it came to overcoming my sportbike muscle memory. “Put your nuts up against the tank and stick your chest out” was good, simple advice that really helped. Of course I also had to remember to keep my butt on the opposite side of the seat into turns (the outside) compared to road racing (the inside), and pushing the bike down underneath me kinda freaked me out. But after enough track time, it started to sink in and I was really having fun.

The biggest compliment I can give to Brian and Socal Supermoto is that I definitely want to go back. One day wasn’t enough for me; I’d really like to get back out there, get more comfortable, and push my learning to the next level (especially when it comes to handling loss of traction). I can wholeheartedly recommend his school; the instruction is terrific, the crew does a good job of maintaining the bikes, and the Adams facility is definitely fun. 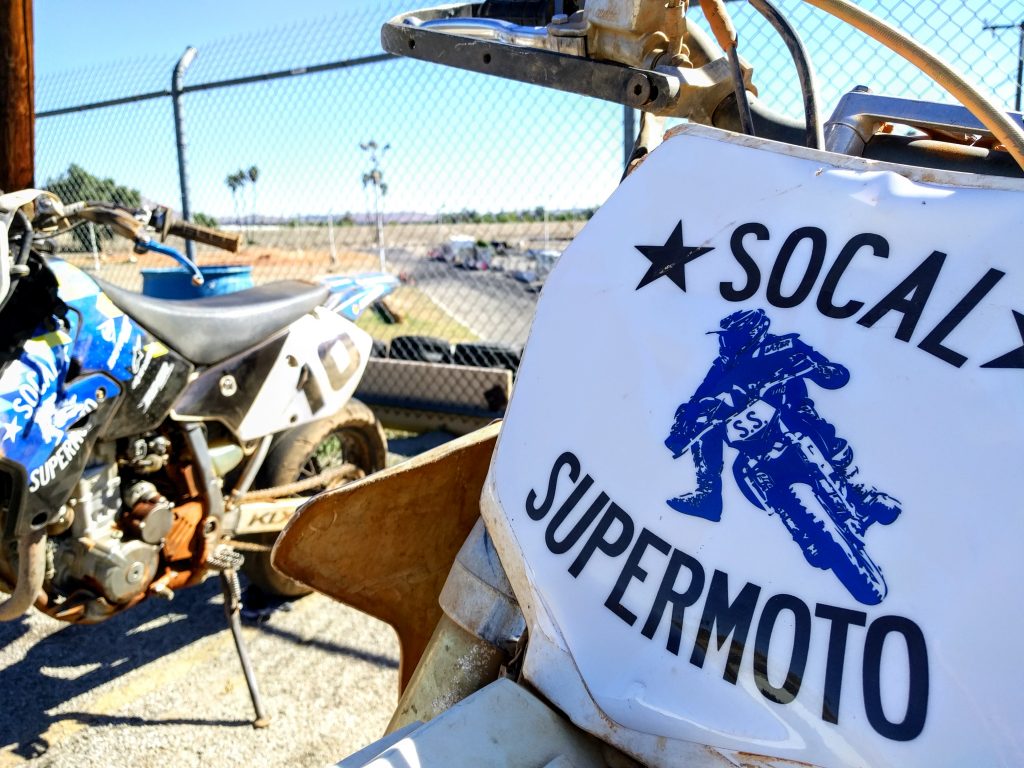