Twisty roads are something many sportbike riders look forward to every weekend, myself included. Here in Los Angeles we have an iconic mountain road right in our backyard called Angeles Crest Highway (aka ACH or The Crest), endless canyon roads in the hills surrounding the Malibu coast and various other excellent mountain roads within an hour’s ride. Perhaps you’ve heard of Deal’s Gap and The Snake, an infamous stretch of curvy forest road in the Smoky Mountains along the North Carolina / Tennessee border. These roads attract motorcycle riders of all kinds; some looking for fresh air and scenery, others looking for the thrill of running turn after turn at speed. These roads can also be dangerous, so it’s important to enjoy them safely by following a few simple guidelines.

Ride Within Your Ability

This applies regardless of where you’re riding but becomes critically important on curvy roads. Keep your speed safely within your comfort zone and “ride your own ride” as some would say. If you’re riding with faster riders and they’re leaving you behind, worry about yourself and forget about trying to keep up. If you’re riding slowly and bikes or cars are piling up behind you, pull over safely at the next turnout and let them go by. Slower riders trying to keep up have caused some of the worst accidents I’ve seen or have known about, including drifting into oncoming traffic and killing a fellow motorcyclist.

That said, as your ability level increases, remember that these are public roads without all of the safety features of the local racetrack. Crashing here means you could go flying off a cliff, into a tree, or into an oncoming SUV. The guy in the video below was relatively lucky and apparently not seriously injured.

Slow Down On Blind Curves 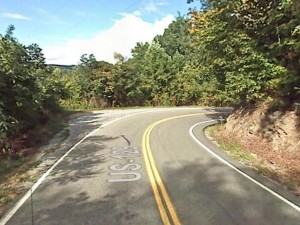 Here’s a nice blind curve on The Dragon (image from Google Maps). If you’re going too fast here, you won’t have time to react if there’s something in the road around the bend. That something could be sand, oil, rocks, a stalled (or otherwise misdirected) car, a deer, etc. If you’re going 60 MPH, you’ve only got one second to avoid something that’s 88 feet away. Keep your speed down on these types of turns to give yourself a chance in case something unexpected is waiting for you.

Stay Away From The Center Divider Line

This mistake is easy to make on left hand turns; you have to lean the bike to the left and can end up hanging your body and bike over the line while your tires are on the other side. I probably don’t have to remind you that some people aren’t very good at keeping their cars in their lane, so it’s always a good idea to keep a healthy gap between your bike and the center divider line.

Gas stations are few and far between on mountain roads, so make sure you know your bike’s gas range and plan your fill ups accordingly. Getting stuck in a remote area with no gas and no cellphone coverage is one of the worst feelings.