Supermoto can seem weird to the uninitiated. A dirt bike with street tires? It’s not until after you’ve ridden a supermoto bike that you understand. They’re incredibly light bikes that you can flick with ease, making them amazingly fun in tight turns and the genesis of photos with riders purposely fishtailing into corners. If you’ve never ridden one but want to learn how, you do what I did — go to Socal Supermoto at the Adams Kart Track in Riverside, California and have Brian Murray show you what it’s all about. END_OF_DOCUMENT_TOKEN_TO_BE_REPLACED

If you’re new to sportbikes, becoming a MotoGP fan is a great way to learn about bleeding edge motorcycle technology and give yourself something to talk about amongst fellow sportbike enthusiasts. MotoGP is the motorcycle equivalent of Formula 1: the bikes are 100% custom prototypes costing millions of dollars, there are factory (manufacturer-operated) and satellite (manufacturer-supported) teams, the races are held all over the world and the season runs from March through November. The top racers can’t walk down a street in Europe without being mobbed, and the sport’s most visible star, Valentino Rossi, is one of the world’s highest paid athletes.

So how do you become a MotoGP fan? Here’s the startriding.com 3 step plan: 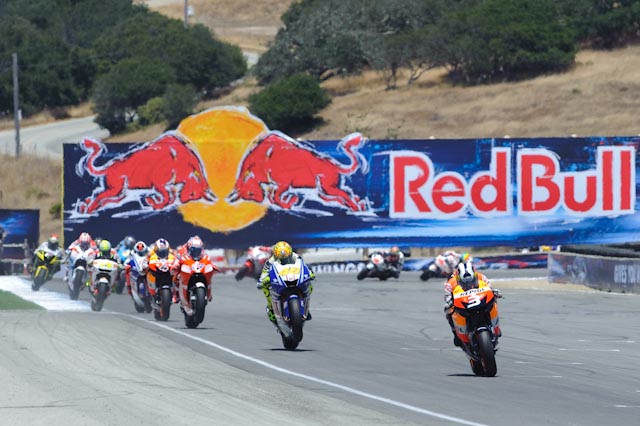 Anyone else heading out to Monterey this coming weekend to soak in some MotoGP action?  In case you’re just getting familiar with motorcycle racing, MotoGP is the motorcycle equivalent of Formula 1 – motorcycle road racing at its highest level.  The MotoGP circus stops in Laguna Seca this weekend and I’m heading out to watch the world’s best go all out, including one Valentino Rossi racing with a broken leg.  It doesn’t hurt that it’s in one of the most beautiful areas in California.  If you’re heading out there too, be on your best behavior – the local police will be in full force.  And oh yeah, bring ear plugs because the bikes are deafening.