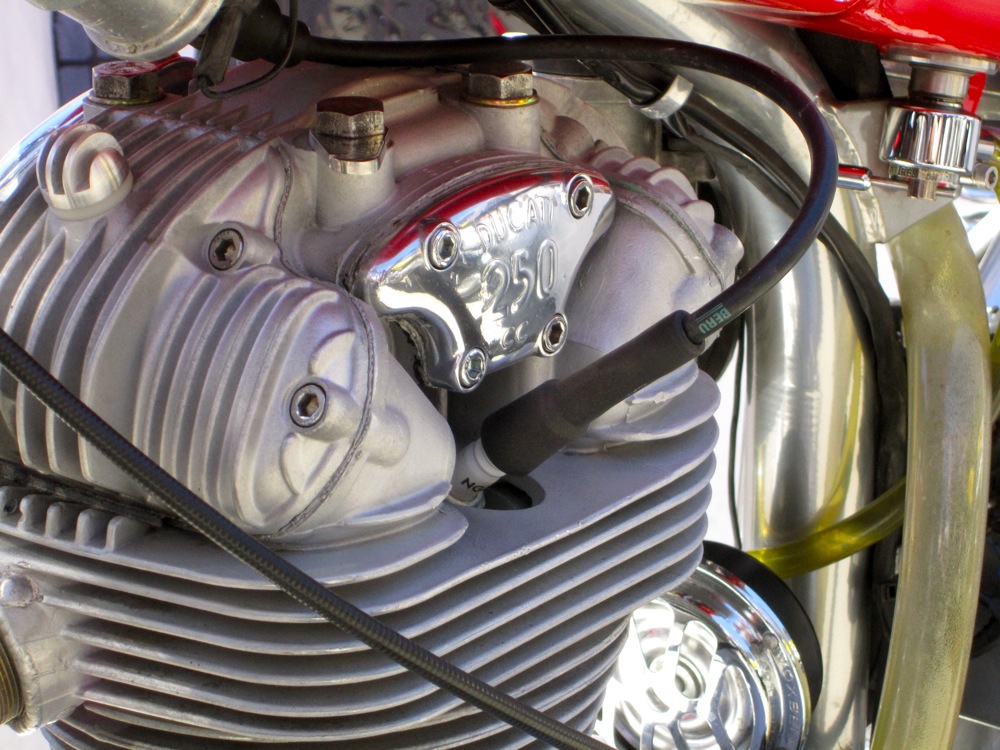 Ah, the good old engine debate. Ask any motorcycle rider what kind of engine they think is best and you will get some surprisingly heated opinions. Our cruiser riding brethren will of course talk up the virtues of v-twins and their torque, while sportbike riders might be divided between inline fours, v-fours and twins. Single cylinder engines (“thumpers”) are usually reserved for dirt and off-road bikes, but one of the better beginner sportbikes happens to use one – the sharp looking Honda CBR300R. Engine type should not be taken lightly when choosing a first motorcycle and I’ll try to make some sense of the differences here.

A v-twin is a two cylinder engine with the cylinders arranged in the shape of a V; you’ve no doubt seen this engine configuration when looking at cruisers. Ducati famously uses a 90-degree twin cylinder engine that looks more like an L, though most people still refer to it as a v-twin. There are smaller sportbikes like the excellent Kawasaki Ninja 300R which use a parallel twin, where the cylinders are configured side-by-side. BMW offers an opposed twin sometimes called a “flat” or “boxer” engine in some of its motorcycles, where the cylinders sit flat on their sides and 180 degrees opposite each other (I happen to find it weird and impractical to have the cylinder heads sticking straight out the sides of the engine on a motorcycle, but that’s my opinion).

An inline 4 cylinder engine has all four cylinders sitting next to each other in a nice neat row. Most sport and race bikes use this configuration, though you may see an occasional V-4 such as the one in use by Honda’s VFR 1200, the Aprilia RSV4 and the ultra-rare Ducati Desmosedici.

Which One is Best?

For a beginner motorcycle rider, one of the most important engine characteristics is torque delivery. More specifically, how much torque an engine makes at the lower RPMs will affect your ability to safely launch the bike from a stop or during sudden acceleration. A rider who hasn’t mastered the clutch and smooth throttle use will have problems handling a bike with more low end torque. They may take off too quickly and lose control, or be too timid due to the power and stall the bike. Either scenario can lead to very bad things.

Torque is a word that gets thrown around a lot when gear heads start talking about their bikes, but most riders actually have a hard time defining it (they definitely know what it feels like though). I tend to explain torque as pulling power. An engine with more torque can haul added weight with ease, whereas horsepower is more important for all-out speed. E.g. if you’re comparing a 600cc v-twin vs. a 600cc inline four:

Where this might come into play for beginner sportbike riders is choosing between something like the Kawasaki Ninja 650R or the Yamaha FZ6R. (Let it be known I think both of these are grey area for a first bike).

The Ninja’s twin is going to have more torque at lower RPMs because its cylinders are larger, and will definitely pull harder when taking off from a stop. The FZ6R’s inline four will have a softer feel at lower RPMs because its cylinders are smaller and don’t produce as much torque, but shows its peak torque and power at much higher RPMs. What I’m basically trying to say is that less torque at lower RPMs is good for beginners, especially those that are new to using a clutch. Not that every beginner is doomed to fail if they start on a Ninja 650R which is certainly not the case; less torque is just more forgiving when pulling away from a stop.

Now what about the smaller starter sportbikes like the Honda CBR300R (single cylinder) and the Ninja 300R (parallel twin)? Since their displacement is much smaller, 286cc and 300cc respectively, they make less torque than their bigger brothers anyway and are more beginner-manageable for that reason. Besides, nobody is making inline fours at those small displacements so you really don’t have a choice.

I started on a Suzuki SV650, definitely a grey area beginner bike. It had lots of low-end torque which made me nervous when taking off from stops, especially when turning right at red lights, knowing I had get up to speed quickly. I once stalled it coming out of my driveway because I was nervous about applying too much throttle while making a sharp turn onto the narrow street. The stall caused me to drop the bike, then I did a spectacular butt-over-back roll as I dropped it again while trying to pick it up. By comparison, other bikes I tried with smaller motors like the Ninja 250, Ninja 500 (both no longer made) and even inline 4 motors on 600cc sportbikes were much more manageable to me at lower RPMs. I eventually grew to love my SV650 but my development as a rider was probably slowed at the beginning due to its generous torque at low RPMs.

5 Replies to “Your First Engine: V-Twin vs. Inline 4 vs. Single”