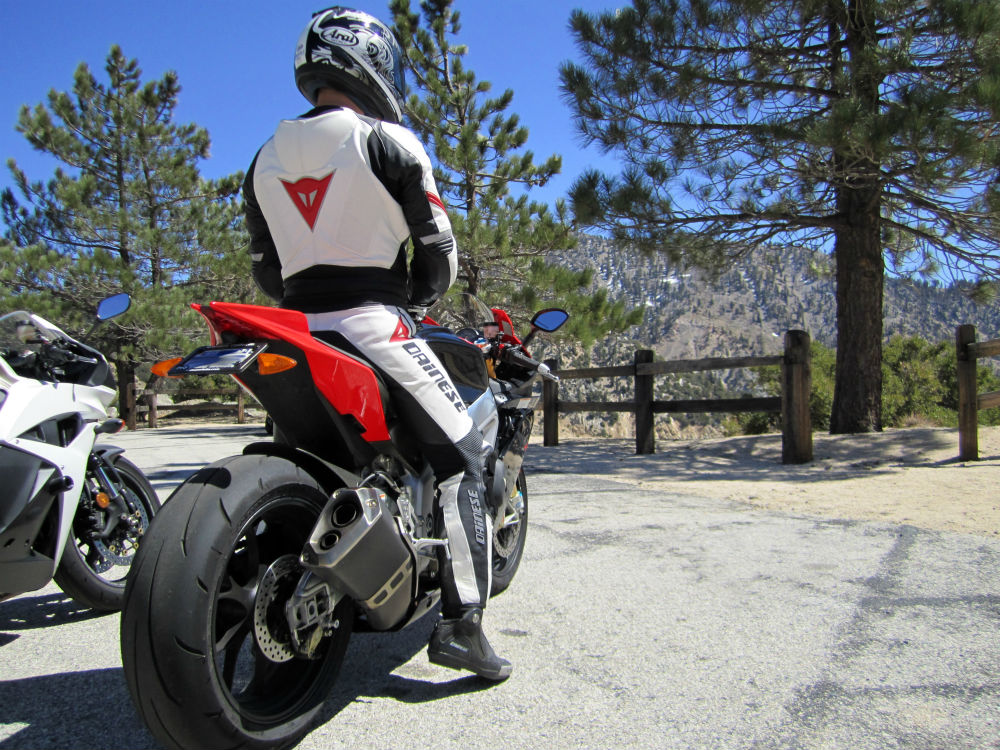 I was never sure I’d make this leap, but it happened. To celebrate 10 years of motorcycling fun, I treated myself to a new (used) bike – the incredible Aprilia RSV4 Factory.

A literbike (1000cc sportbike) was something I really didn’t consider until recently, and certainly not something I was ever aiming for as a beginner. I liked sportbikes and wanted to have one someday, but was more enamored with middleweight models. Besides, I saw literbikes as squid-bait and wanted to avoid being “that guy with the fast bike he can’t ride.”

I started out on a Suzuki SV650 which I rode for 9 months, a bike that came with mixed recommendations for a first ride. It was certainly a more civilized bike around town than any full-blown sportbike, had plenty of power and a comfy upright riding position. What I didn’t like about it as a first bike was that it was too powerful at times, especially because the grunty v-twin engine had a lot of torque that made it hard to be smooth when taking off from a stop. That made me nervous at busy intersections; I stalled the bike many times and even dropped it as a result. I had originally wanted a Ninja 500, but they were difficult to find and I bought the SV650 when I found one for sale less than a mile away. There were definitely times I regretted not waiting for the smaller Ninja.

Eventually I managed to become more comfortable with the SV, riding it seemingly every Saturday and Sunday that it didn’t rain. At the nine month mark I started to get that second bike itch and found myself wanting something more performance oriented, especially with regard to suspension. I read every sportbike review and comparison imaginable, finally settling on a brand new 2005 Yamaha R6.

The transition from a standard to a supersport was a mixed experience. The lean-forward riding position was definitely less comfortable than the SV650’s. The limited steering lock (can’t turn the bars very far) and more top-heavy nature made it unwieldy in parking lots or slow-speed situations. It was all of three weeks old when I dropped it in a parking lot for those reasons, scratching up all that pretty black paint and embarrassing myself in front of 30 other bikers.

On the flip side, the R6’s handling was so much sharper. The engine was smoother. The brakes were better. There wasn’t anything it couldn’t do better than the SV from a performance perspective. I rode it for the next nine years on seemingly every back road in southern California and at many trackdays. I went to track school several times, read everything in site about track riding, learned a lot about suspension and studied photographs of myself to improve my form. The R6 helped me learn what a sportbike is all about.

Thinking back, it’s somewhat surprising that I kept myself from buying a new bike sooner. Then again, the R6 was so good to me that it was hard to imagine a newer middleweight sportbike being a satisfying purchase for me. If there was ever going to be a weakness for me in terms of buying a new bike, it had to be something different.

I was always tempted by naked sportbikes like the KTM Super Duke and MV Agusta Brutale, but struggled with the thought of owning a bike that isn’t built for the track (I LOVE trackdays). Then I rode the BMW S1000RR at Keith Code’s superbike school and was shocked by how agile and light it was for a literbike. Aprilia released the RSV4 in 2010, and slowly over the next few years it became the literbike I actually wanted. The R6 was aging, and it was probably just a matter of time before desire defeated reason.

Through dumb luck I found a lovingly used 2010 model in excellent condition with low miles on an unplanned visit to the local Italian moto shop (not a good place to hang out if you don’t like spending money). I picked it up the next day and rode it over 100 miles, taking it up the famed Angeles Crest Highway for a burn-in run. Toward the end of the day, I realized the transition from my R6 to the RSV4 had a familiarity to it. I had been through this before when I went from the SV650 to the R6 — the Aprilia is that much different than the R6:

Coming from my R6, the RSV4 Factory is the next level and then some. I’m going to work to ensure my skills evolve to match the bike, and I’m certainly going to enjoy riding it on the roads and at the track. Getting to that next level is what it’s all about, especially when you’re just starting out. That’s kind of what this bike has done for me; in some ways it feels like I’m a beginner again.